Folks have been asking for a review of critter commandos so I thought I would give it a bash! 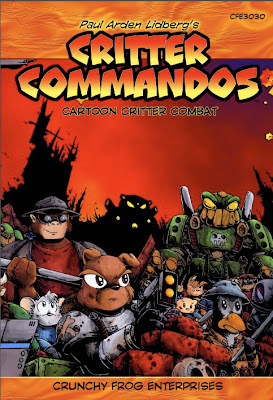 Critter Commandos!
Review
The book is separated into two main sections, the rules and background material. This includes a short comic at the start of the book that sets the mood and tone of the game.

The Rules
The rules themselves are relatively straight forward, and start with a brief overview of the game and required equipment to play.

The game requires a combination of six and ten sided dice (henceforth D6 and D10) and each figures abilities are recorded in an ‘index’ much like the usual stat line in other games.

These include Strength, how good the model is in close combat; Accuracy, how good it is at shooting; Mind, its intelligence and morale; Move, how rapidly it moves and Cost, its value in the game.

Each turn starts with both players rolling a D6 with the lowest activating first. They can activate as many or as few troops as they wish. Play then moves to the opponent.

Movement is effected as usual by different terrain but many of the critters have special abilities that nullify this, for example raccoons can move through forests unimpeded.

This section also covers facing, squad formation and flight, with each being covered simply and with minimum hassle.

Next up comes ranged combat in the form of the Shootin’ phase. Players first select a target then check to see if it’s in its firing arc, line of sight and finally range. There is no pre-measuring in the game so a player may attempt to shoot an opponent, only to find it’s out of range.

If it is within range, the player rolls to hit on a D10, requiring them to roll less than their Accuracy skill.

As usual there’s a host of modifiers that will affect this like the target being in cover but handily cover can be shot up and destroyed!

If successful the attack causes damage, or holes (a critter can be turned into Swiss cheese but will return in the next game as they are cartoons after all!)

There are also rules covering grenades, flamethrowers and automatic weapons, which will add all sorts of carnage to the game.

The Poundin’ phase follows on from this with both players in a combat striking at each other, again requiring a roll on a D10 of under their Accuracy skill.

Combat can be resolved with wounds, kills, force backs and follow ups and even the losing player funning for it which brings us onto the last phase, the Scaredy Cat Check or rout and morale checks.

The next section of the rules covers weapons and equipment ranging from guns to portable walls, tricycles, magic rope and all sorts of bringers of cartoon violence.

The first thing a player needs to do is to select which characters they wish to use in the episode (a cunning renaming of a scenario!) and arm them with an assortment of weapons ranging from mundane guns to pies and portable holes in true cartoon fashion!

This section of the rules also covers the individual critter types with everything from Alligators to Wolves. Each has a different stat line and abilities that range from combat to armour which brings a nice element of individuality to the different breeds.

Lo-Tek vehicles such as cars and tanks are also covered in the rules, but Hi-tek like Teks, giant robot suits are covered in the supplement Crittertek.

The low-tech vehicle rules are nice and straightforward and allow one to create all sorts of weird sand wonderful vehicles. Saying that the examples shown are rather destructive looking and probably capable of slaying critter infantry with relative ease. A plan may be to down gun them somewhat.

Scenarios or Episodes are covered briefly, along with some sample squads such as Sergeant Furry and his Growling Commandos followed by a note on tone.

The note on tone is an element sadly missing from many wargames and informs players the whole point is to have fun and that if something doesn’t work in the rules then discard them! Also the tone of the game is slapstick silliness rather than hardcore sci-fi, which makes a nice change from the many serious games out there with gloomy settings!

The Background
The second main section of the book is the History of Everything (sort of…) and covers the background material, which sees the evil, if somewhat incompetent Ratzi Empire attempting to take over the galaxy. Facing them is the somewhat interfering F.R.O.G Federation. Along side these two main powers several small ones are mentioned ranging from planetary governments to mercenaries and merchants.

The background itself is very lighthearted and may not appeal to all readers but makes for a great game to introduce new players, especially younger ones, to wargaming and has lots of possibilities for campaigns and scenarios.

Conclusion
There are a few slightly unclear elements to the rules that could have done with illustrated examples and the interior artwork varies wildly in quality from the slightly subversive Brothers Grimm who created the cover and comic at the start, to some of the somewhat dull interior artwork but these are minor quibbles and don't lessen the fun of the game itself, and as already stated, if you don't like an element or it doesn't work, then change it! The game is supposed to be fun to play!
Critter Commandos is a very enjoyable, light hearted and most importantly fun game that doesn’t take itself too seriously yet still retains its playability and as its available cheaply as a pdf, its well worth a peruse!
Hopefully my rambling review will inspire a few folks to give it a go!

All the best!
Posted by Leutenant Brittan at 13:20

Email ThisBlogThis!Share to TwitterShare to FacebookShare to Pinterest
Labels: Review 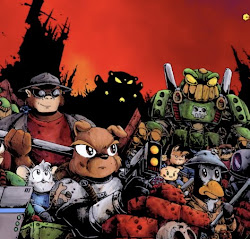 What is Critter Commandos?

Critter Commandos, published by Team Frog, is THE game of "Funny Animal Skirmish Battles". Currently in its 3rd edition, this sci-fi miniatures game allows you to control groups of anamorphic creatures who then blow holes out of each other (literally) as they battle each other across the Critter-verse.
The companion game Critter-Tek allows you to play "Giant Funny Animal Robot Combat".